Cocomelon is the second most popular YouTube channel in the word at the time of this writing with over 105 million subscribers. How did Cocomelon get started? How does Cocomelon make money? What is Cocomelon worth today?

We will look at all of the facts about this YouTube channel and see how the founders sold the business to become an amazing entrepreneurial success story. 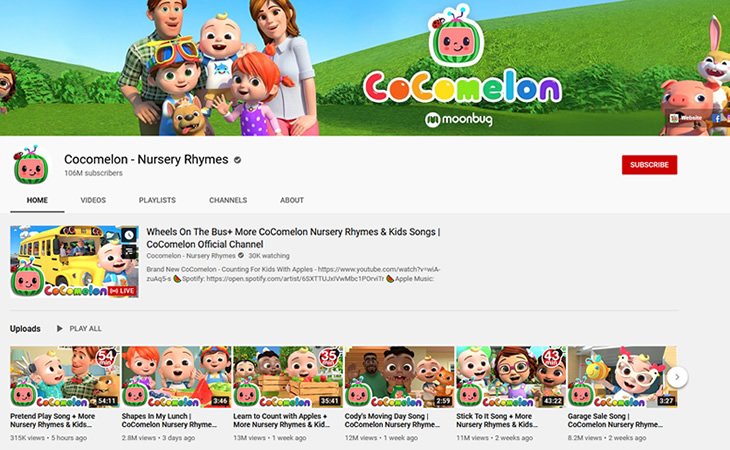 How Cocomelon Got Started

Cocomelon was started on September 1, 2006 by Jay Jeon who is founder of Treasure Studio, Inc. and his wife. Jay’s background included work as a storyteller and filmmaker while his wife has experience illustrating children’s books.

The couple started the channel as a hobby as a way to offer people free education and to entertain their sons. They called the channel ThatsMEonTV.

Their first video ever uploaded by the couple was titled “ABC Song With Cute Ending”. This is a very short video at only 44 seconds long.

Today this video has 202 million views and is growing daily.

They also uploaded another video on the same day which is another version of the alphabet song.

The beginning of the Cocomelon YouTube channel was quite slow. After publishing their first two videos in September of 2006, Jay and his wife did not publish another video until June of 2007.

In the years from 2013 to 2018, the channel rebranded to call itself ABCkidTV.

It was during these years the company started to grow the type of videos created to include nursery rhymes. They also started to make longer videos.

In 2017, the YouTube channel run by Jay and his wife rebranded itself again to the now famous Cocomelon.

They changed the name of the channel to CoComelon because they felt the original name felt limiting. The name CoComelon seemed a better fit and the popularity grew from there.

Their first video with the Cocomelon branding was uploaded on January 20, 2017 and titled “Down by the Bay”.

In the years following, the Cocomelon YouTube channel exploded and has become the second most popular channel on the platform.

They have even gone on to have full length shows on NetFlix, Hulu, Amazon Prime Video, and Disney Plus.

Over the last 3 years the company has added a whole list of characters to it’s line. These characters which are now quite famous are listed below:

In July of 2020, it was announced that Cocomelon was purchased by Moonbug Entertainment. The amount of the sale was not disclosed but we will do a basic valuation below to see what the brand may have sold for.

In September 2020, the Cocomelon brand expanded even further when they added merchandise to their line.

What Type of Business is Cocomelon?

This company started as a YouTube channel with very humble beginnings.

Through the years however and several rebrandings later, Cocomelon has evolved into a major brand.

Yes, the Cocomelon YouTube channel is still growing in popularity. The people running the business today have taken the growth of YouTube and used that to create various marketing channels for this brand.

The Cocomelon brand is also an Amazon FBA seller and a major producer of animated films for some of the most popular streaming platforms.

How Does Cocomelon Make Money?

Since the main focus of Cocomelon has been YouTube, the majority of their revenue comes from ads displayed on their videos.

With over 750,000,000 video views per week, the ad revenue for this YouTube channel is enormous.

It’s estimated that the Cocomelon YouTube channel has an ad revenue of $800,500 to $12.8 million per month! These are estimates as found on Social Blade.

There are estimates that the annual ad revenue for Cocomelon is around $120 million.

Regardless of whether the estimates are on the low end or high end, the ad revenue for this YouTube channel is quite amazing.

Besides ad revenue, this company has also licensed it’s content to the largest streaming providers such as NetFlix, Hulu, Disney, and Amazon Prime Video.

While it’s not clear how much they make for these licensing agreements, we are sure it adds nicely to their bottom line.

Cocomelon has also expanded into another revenue channel. They have been working with a company called Jazwares who now produces a line of merchandise for the company.

This line of merchandise has been extremely successful since its launch in the fourth quarter of 2020.

Cocomelon merchandise can be found at Amazon.com, Walmart, Target, and just about every major retailer.

How Many Subscribers Does Cocomelon Get Everyday?

This is a massive YouTube channel. At the time of this writing this channel has 105 million subscribers with an estimated 2 million new subscribers added every month.

What’s the Net Worth of Cocomelon?

While we cannot get an exact value of Cocomelon, we can come up with a good estimate based on the figures that we know.

It’s thought that the company makes somewhere in the neighborhood of $120 million in ad revenue. Add to this what they make from their licensing arrangements and the sale of their merchandise, this is not disclosed.

So, let’s figure net worth from ad revenue and then derive an estimate from there.

If Cocomelon’s ad revenue is truly near $120 million per year, if we only valued the business on that it would place their value near $350 million.

However, since we don’t have all the figures, it’s safe to assume the Cocomelon brand is worth between $200 million to $317 million.

Not bad for a YouTube channel that started as a hobby!

We do know that Cocomelon was sold to Moonbug Entertainment in July of 2020. We don’t know the specifics of the deal or how much the founders Jay Jeon and his wife were paid.

It is clear from the stats that are available though that this figure must have been in the high eight figures to possibly nine figures.

If the business was sold today from what we know, it would sell for between $250 million and $350 million.

Sold For: Somewhere in the neighborhood of $60 million to $100 million (amount was not disclosed)

If you’re looking to start a YouTube channel or maybe you’re already a YouTuber, we can learn a lot from this case study of Cocomelon.

Let’s take a look at the things we need to pull out of this study to see how you can apply it to your own YouTube channel.

If you’re interested in building a YouTube channel, the first point that you should learn from this study is that you need to get started.

Look back at the beginnings of Cocomelon. The two founders started as a hobby. They only wanted to entertain their sons and to provide free education to their young viewers.

Like many, they could have been frozen with fear wondering whether people would like their videos. Instead, they took what talents they had, and got started.

Their first videos were very short, and really nothing incredible. They then went close to 9 months before uploading another video.

Even after that lapse, they picked the ball back up again and started again.

If you’re the type that analyzes everything and lets fear stop you, learn from this and just get started. Don’t let fear hold you back.

The founders of Cocomelon understood they were creating content to reach younger viewers. They understood their audience and created content that was relatable to that niche.

As their channel grew, they innovated and created adorable and relatable characters that their audience fell in love with.

If you’re looking to start a YouTube channel or simply want to turn your channel into something bigger, make sure you take the time to understand your viewers and what they want. If you upload material that is not relatable to your audience, they won’t subscribe or stay around long.

Cocomelon was rebranded on three different occasions since their first video upload in 2006.

As the YouTube channel grew, the founders understood their audience even better and began to see what worked and what didn’t. They had a goal to build a brand that would resonate with their viewers.

It was obvious the brand’s content was working as their subscriber base grew but, they felt the name ABCkidTV was a bit limiting so renamed the channel “Cocomelon”.

The name, their characters, and the whole feel became what today is known as the Cocomelon brand that so many have come to love.

They then turned their brand recognition off of YouTube and turned it into a highly successful external brand name.

The key takeaway here is to think about creating a “brand” that people recognize. Make sure you think about the look, the feel, and most importantly, that the content matches your brand’s vision.

If you already have a channel, it’s never too late to think about your brand and how to make it more relatable to your viewers.

How To Apply This

Remember, if your goal is to create a YouTube channel that makes money from ad revenue, you will need to get hundreds of millions of views to make any real money.

Cocomelon is able to make so much from ads because they have an enormous amount of video views every month.

There are other ways to make money using YouTube which include affiliate marketing.

By utilizing YouTube to promote your products and services or promote them as an affiliate can make you money without the need of this huge audience.

Using YouTube to help build an external brand is also smart and can be a great way to gain recognition for your online business whatever type it is.

If you want to build a YouTube channel, we encourage you to take some time to learn what it takes to do it successfully.

You may already have a YouTube channel. If that’s you and you want to learn to grow it, take a course and learn from others what it takes to make it better.